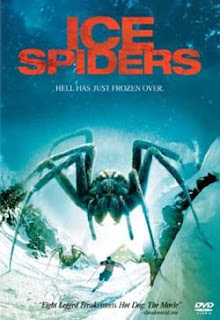 I miss the good old days of Sci-Fi channel originals like Ice Spiders. They were normally a bit of cheesy fun throwbacks to the creature features of the fifties and early sixties. Simple and fun. I remember this movie fondly but honestly now I’m beginning to question my memories.

The action starts with a couple of inept hunters out in the woods looking for game. One of them has his sights set on a large elk when they see a giant freaking spider scurrying around. Of course, they take that shot and only manage to piss it off. Things don’t go their way and they end up on the menu. The “action” then shifts to a bunch of Olympic hopefuls being brought to the ski resort for some training. They arrive and meet a has been skier named Dash and his boss played by Stephen J. Cannell who we children of the eighties will remember as the “sit Ubu sit” guy. They do some skiing, some army guys show up, there is a science lady, and a bunch of folks die to badly rendered CGI spiders.

I honestly remember liking this movie when I first saw it. Admittedly it has been more than ten years since I last took a look, but this was surprisingly disappointing. The pacing of the movie is way off with a bit of action involving the hunters before the introduction of the main characters. The movie slows way down as it plods thru trying to establish them and in the end fails as I couldn’t tell or care when/why characters died. That might also be because most everyone that gets chowed down on by the arachnids are nameless and seem to exist in the story only to up the body count.

Monster movies aren’t hard to pull off if you do one simple thing. Make us like the characters, or at least identify with them and then kill some of our new favorites off. Here all the “good” guys survive until the end. I’m not expecting high drama or emotional impact from a goofy movie like Ice Spiders, but at least try and make me care just a little bit! I didn’t even get a chance to like Ranger Rick before he was killed off, lamely. To that end I suppose it is time to discuss the kills and special effects work.

The spiders are brought to the screen with digital effects work, no surprise there. But even for the time and budget these are terrible effects work. It seems rushed as the CGI arachnids don’t seem to match up with the environments they are being added too. And while the movie hints at a much larger scale for the carnage we only get seven kills onscreen and not just in the background. Here is where I would normally list off the kills and rank them from favorite to least liked. But they all blend together without a single standout kill for good or bad reasons. I was disappointed.

Toss in some generic metal music that makes the outdoor scenes feel like one of those horrible extreme sports VHS tapes that people inexplicably bought in the nineties, and you end up with an unpleasant and tedious way to kill ninety minutes. I need to revisit some of the better Sci-Fi originals like Mammoth or Metal Shifters to wash the bad taste of this one out of my mouth. I obviously am not recommending this flick.