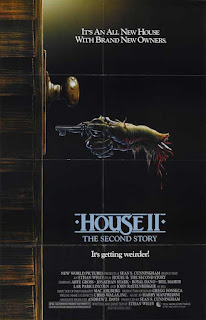 Time to take a look at the second movie in the House franchise. This one has a much different tone and is more family friendly then the first. Instead of scares and horror we get cute puppets and a kindly zombie great grandfather. Shall we take a look?

Anyone expecting a direct connection to the first House movie don’t. This one has nothing to do with the first, other than there is a house involved. Here we see a couple in the past giving their baby away and being killed by a mysterious figure almost immediately afterwards. Twenty-five years later that baby, now grown up, comes back to claim his inheritance. Jesse, the grown-up child, and his girlfriend are just settling in when Charlie shows up. He is Jesse’s drunken friend and has a young lady in tow. There is a subplot involving Charlie and Jesse’s girlfriends and a devious music producer played by Bill Maher that is forgettable. The good stuff involves the boys and Jesse’s dead great great grandfather.

Reading thru some old papers Jesse realizes that there was a very valuable crystal skull that has gone missing. It is worth a lot of money and he decides it must be buried with his great grandfather. Of course, the most reasonable thing is to go dig him up to see if he has it. Um okay I guess… Well Gramps isn’t dead, more undead, and after finding out that Charlie is his great great grandson he takes a liking to him. The Skull has been keeping him alive but he warns them that it will also attract evil. When a prehistoric caveman, some Aztec Indians, and Gramps’ old west outlaw partner eventually shows up no one is surprised. Let the mayhem begin!

This is a decent movie. The story is entertaining and uses the location of the house in an interesting way. See as the evil beings are attracted to the skull they open portals in the house. When Jesse and Charlie go after the skull they step into a bedroom and end up in the past dealing with dinosaurs or temples full of Aztec warriors.  This reminds me a lot of My Science Project and how the high school had connections to different time periods and mixed up the inhabitants of those places with each other. Same thing here as Jesse ends up with not only zombie Gramps, but a prehistoric bird, and a dog/caterpillar hybrid as well. The previous pair being brought to screen with cutesy puppets that the kids will enjoy. Hell, he even gets a new Aztec girlfriend when he saves her from being sacrificed! 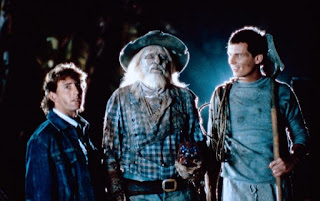 There isn’t any gore and honestly it wouldn’t fit in House II. Even the characters that are dead aren’t played for scares. The makeup is pretty tame compared to Big Ben from the first movie. House II is a much sillier take on the idea. While I enjoy the one of the first House much more I will give this installment credit. It has that quintessential ‘80s Horror for kids feel to it that movies like Monster Squad or the previously mentioned My Science Project had. It is an intelligent and well written flick for a younger audience. Don’t see many of those anymore.

I recommend House II: The Second Story with the caveat that it is a much different movie than the original. Still I enjoyed it and thing that it is a solid follow up. But if you dive into it thinking you are getting more of what you had the first time around you may be disappointed.

Posted by Gutmunchers Lives at 9:26 AM