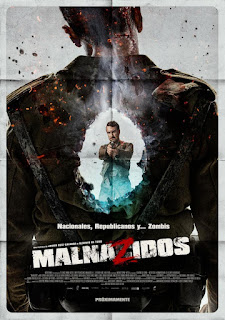 I saw this Spanish language flick show up on Netflix and thought I’d give it a chance. I mean there are zombie and evil Nazi scientists… it has to be a little bit fun right? Set towards the end of the Spanish Civil war this movie has the Germans testing a new weapon out on the battlefield. It is a gas that reanimates corpses and sends them off on a killing spree. In the middle of this our main character, Jan, is pulled from his execution by his uncle, who happens to be a general. He is sent on a dangerous mission to deliver a message to another unit. Sort of a dirty dozen thing, only it is just him and his driver.

On the way there they take a shortcut and force their way pass some Germans who are setting up a roadblock. That might be a bad sign right there. To make things worse they also stop along the way to check on a pilot who bailed out of his plane after losing a dogfight. This leads them to get captured by the other side but that quickly becomes moot when the zombies show up and they need all hands-on deck to survive. Later they find even more survivors and again have to band together. This motley crew has to find the cure, or at least stop the experiment before everything goes completely to hell.

I really dig this movie. I love the setting of Spain during the late thirties. In the years before WWII both Germany and Russia used the war to test out all sorts of familiar strategies and equipment that would be used later on. So, slipping in some secret zombie tests works well and was sort of fun to watch. Plus, whenever you can work a Nazi in as your villain it makes your movie better. That said the movie focuses on those trying to survive rather than the bad guys and that is another good choice. The story takes enough time to introduce and make you like them before they die in heroic and sometimes horrible ways. Getting the audience invested in the characters and their fates which makes things much more engaging as a viewer. 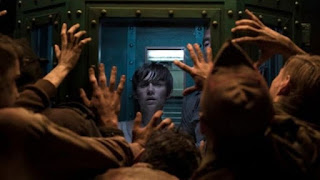 The action is nonstop as our survivors go from one dangerous location to another. From the opening scene with the Germans crashing a wedding to scene after scene of them being pursued by the zombies things never get boring. This movie is an hour and forty minutes long and it was over before I knew it. I was totally sucked in with the story, characters, and action.

The zombies themselves are fairly generic, and you don’t get a ton of gore. Not much more than some torn throats and headshots. But Malnazidos more than makes up for that in the sheer volume of violence as many people and undead get blown away. The filmmakers also double down on their vision by mentioning in passing that the dead have dried powdery blood which they keep showing as each bullet hit causes a cloud of red dust to emerge from the wounds. Makes the all too familiar zombie horde scenes different and visually interesting. That said they do reference the genre and the flicks that came before it in a couple neat ways including the “when there is no more room in hell…” line.

I never heard of this before it showed up on Netflix for streaming. After poking around a bit, it appears that the release was delayed by COVID and that might be why. When it comes to zombie movies, I tend to know about them, even if they are from other countries and don’t get a theatrical release in the US. I’m a nerd about the subgenre. I can without qualification tell everyone to check out Malnazidos. It is a good time.