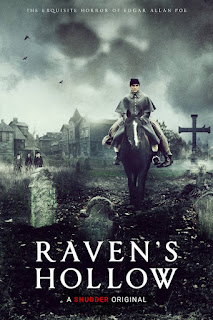 A young lady is walking in the woods when creepy stuff starts to happen. She makes it back home before something, leaves or insects, swarms her and she disappears. After that there are some men on horseback. As they ride along, they discover a man strung up with his insides on the outside (never a good thing) who whispers “Raven” before dying. One of them, Cadet Poe, decides that they take the body to the nearest town. That town is named Raven’s Hollow. Uh oh…

The locals are a mixture of mysterious and hostile. Regardless they clearly aren’t welcome in town but decide to stay one night. That night one of their number comes up missing. This leads the rest of them to try and figure out what the hell is going on. Why do the townsfolk refuse to acknowledge the identity of the body, who clearly was known to them? What is this raven creature that they seem to fear and perhaps worship? And finally, what is up with the beautiful Charlotte who has caught Poe’s eye? There are a lot of questions and before the end they will be answered. Sort of, I think.

I’d consider Raven’s Hollow a mystery with horror elements. At it’s core the movie is about who or what is responsible for the killings, along with how it connects to the locals. Our main character is Edgar Allan Poe, a fictional version of the real life author. I had no idea that Poe attended West Point, but he was briefly in eighteen twenty nine. That is when this movie is supposed to take place. It is what I’d consider a very slow burn as it spends a great deal of time trying to create an atmosphere while unraveling the goings on that lead to the murders. While that might not be everyone’s cup of tea I thought the filmmakers did a great job and was interested in what was on screen. 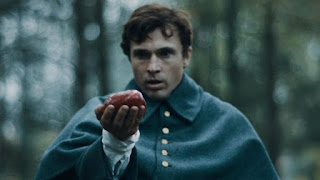 When we finally do get to the supernatural elements of the story I was satisfied as well. The creature is eventually revealed and while CGI it has such an otherworldly look to it that this was probably the only way to bring it to the screen. The kills aren’t too elaborate or plentiful but serve the story perfectly. Folks get gutted, throats cut, one unfortunate cadet gets skewered, and a heart gets torn out and tossed down to Poe. Not terribly bloody but it was gruesome enough to sell the rest of the proceedings.

The sets and locations are amazing for a low budget movie. This feels like a creepy old town from the early eighteen hundreds. At least in that over stylized creepy horror movie way. I know that this movie was shot in Latvia and I’m not sure if those were standing sets or something they built but it looks awesome. Toss in some clever references to Poe’s later work insinuating that these events made him who he was, and you have a well made movie that is worth checking out. I recommend that you track this one down. Currently it is streaming on Shudder, which itself is worth your time and money.

Posted by Gutmunchers Lives at 2:26 PM