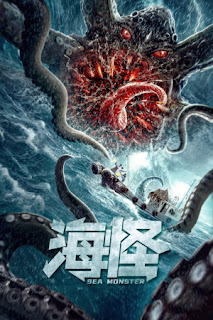 Every October I try and find a new movie that showed up on the shelves at my local big box retailer. It is a wild card and if I’m honest it normally sucks. I mean a horror movie that I haven’t heard of but that made it to the shelves normally means it is not good. With that in mid I thought I’d check out a little Chinese production titled Curse of the Kraken. Hey maybe it is a cool monster movie… it could happen.

We start off with an ominous voice over warning us about pollution and mutations. The we join people frolicking at a beach. This includes a newly married couple, some folks competing in an octopus eating contest, and other such weird thing. Suddenly a bunch of garbage flies out of the ocean and lands on the beach. This is followed not long after by a giant monster called the Kraken. Some folks it eats, and others get a tentacle jammed down their throats. Those unlucky enough to be counted in the latter turn into hosts for the monster’s offspring. And they turn into weird looking monsters that also run around killing people. This is all before the credits roll and we meet the main characters.

There is a boat. We meet the crew. The captain is retiring and chooses not his son to be the new captain. They keep repeating one crew one heart, which is the ships motto. The lady doctor of the ship turns out to be the bride from the attack on the beach (it is here that we also find out that was years ago). She has a cure to kill the monster… don’t yell at me that is what they call it! Then there are some pirates, flesh eating beetles, lots of people die, there is some kung-fu, and then I think everyone is dead. Not sure the ending is confusing.

Curse of the Kraken is an incredible mess of a movie. I’m sure that some might say that it was lost in translation being that this was a Chinese production. But I’ve watched a lot of Chinese produced movies and I feel qualified enough to point out that nothing makes sense. The most obvious is that the titular Kraken shows up for a hot second before the main story and then really doesn’t do much until the end. Well unless you count it popping up to eat the flying two headed shark that comes out of nowhere and that none of the pirates seem concerned about. If you are going to have a movie called Curse of the Kraken how about making the Kraken a big part of the story. To not do so seems awfully random.

That reminds me of another issue I have with the movie. Things pop up out of nowhere and we are just supposed to be “okay that happened.” Pirates attack the ship and that is a thing. The pirate leader lady shows that she doesn’t care by having one of her guys shoot himself. You have guns pointed at her… why surrender to this? You outnumber them! Then they get taken to a pirate island where the flying two headed shark shows up. Wait… a pirate island! How has no one noticed that and taken care of it? We have a prisoner cut his ropes and “sneak” away in plain sight. No one ever notices or acknowledges that he is gone. Do you see the pattern yet? To top it all off out of nowhere the cast suddenly can fly around doing Kung-Fu twenty feet in the air and that is just now a thing they do now. Probably would have been helpful when fighting the pirates.

The digital effects work in the movie are laughable. Wait no that might give you the impression that there is some enjoyment. The effects are garbage. The size of the titular Kraken, again barely on screen, changes constantly. It also looks like something you would have seen in a video game cutscene from twenty years ago. It is distractingly bad and only gets worse when we get the “tentacle view” of it jamming said appendages down people’s throats to infect them. The monster masks on the infected/incubators are silly but at least practical. Though I’m sure a hundred bucks and a trip to Spirt Halloween would produce the same results. The kills are tame and consist of digital models dragging characters away to an unseen fate or one of the rubber faced critters biting someone and running away.

There is nothing good to say about Curse of the Kraken. Well, okay it is only an hour and ten minutes long, so the pain is over quick. This is a bad movie that I recommend you stay very far away from.

Posted by Gutmunchers Lives at 9:46 AM