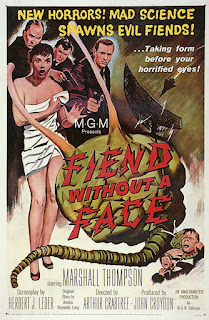 A man is found dead after lurking around an airbase. The military wants to investigate what killed him, but the locals refuse to let them. They even stop any attempts at an autopsy. They just assume that he died because of the nuclear reactor in the nearby base. They also blame the issues with their dairy cows on this as well. They are rather angry at the military. This is only made worse when more bodies are found. Eventually the doctor’s figure out that the brain and spinal cord of each victim is gone!

Is this an alien invasion? I mean it is a creepy fifties science fiction movie so that would make sense. But in a clever twist it turns out that it isn’t the military but instead a retired professor who has been using their nuclear powered radar to fuel his own experiments. The result is a bunch of creepy looking invisible monsters that he has lost control over! The best part is when the reactor gets out of control and the monsters become visible though. Then it gets good… really good.

This is one of those fifties movies that people don’t talk about, but the creatures show up everywhere. Trust me if you have seen a documentary or special about science fiction movies then the brain monsters from Fiend without a Face have been shown. I know that normally I talk about the plot and characters first but I’m making an exception here since the creatures are the reason to watch. Initially you don’t see them only hear something moving around the scene with some occasional hay or grass sliding out of the way. The kills are sold by the actor grabbing at their neck and falling to the ground.

But when the power is amped up from the nuclear plant running out of control, they get so supercharged that we get to see them in all their glory. A brain with eyestalks that movie around by pushing themselves on spinal cords. See where all the spare parts from the victims went? This is brought to the screen with some well executed stop motion work as well as latex puppets that get wrapped around the cast when there is an attack. The best part is when they are shot, they sort of pop and spit out what I suppose is blood or maybe monster ooze. Pretty gruesome for a fifties flick and I love it. 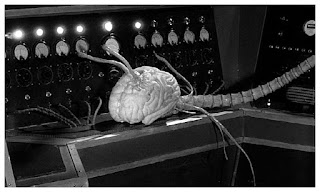 The cast is okay with the only highlight being Marshall Thompson as Major Cummings. He is the army officer trying to sort out the killings and is who we follow as the story unfolds. It was interesting to see him here as in the same year he also appeared in It! The Terror from Beyond Space, which is another favorite of mine. He had a good year. His love interest is played by an actress who had a rather short career. Kim Parker is Barbara and does a rather risqué bit, at least for the time, involving her in the shower. I think that she retired to have a family. What was interesting about her though is that she was a refugee who survived a Concentration Camp. After the war she traveled to and settled in England (where this movie was made). Nothing to do with her acting, she is pretty good, but that sort of real life horror put this silliness in the proper perspective.

This is an excellent flick that I highly recommend to everyone. It gets right to the good stuff and never stops being creepy and fun for a second. I’m not sure where it is currently available but for this review I watched the Criterion release.

Posted by Gutmunchers Lives at 8:34 AM