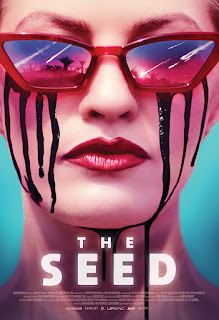 Influencers… this is a concept that I never wanted to understand and certainly didn’t want in my horror flicks. But even an old guy like me has to deal with changes in society so when I realized this flick was all about some influencers that head out to an isolated house for a photoshoot to post on social media, I sucked it up and sat down to watch. I’m glad that I did.

The three ladies are Deidre, Heather, and Charlotte. The first two are all about posting to their lives to the internet and somehow make their living that way. Charlotte works in a pet store and has a crappy phone that the other girls laugh at. It is cool though since they are friends. They have headed out to Heather’s place… or rather her dad’s place… to shoot some pictures for the launch of Deidre’s new cosmetics line. There is also a “once in a lifetime” meteor shower to watch, which they almost miss because they are complaining about the lack of cell service. While this is happening, something crashes into the swimming pool.

Here is where it gets good. The thing in the pool is some sort of creature that slowly works its way into the house before hypnotizing the girls into rolling around in the innards that it can shoot out of its chest. At least that is what Deidre and Heather do. Charlotte is our voice of reason and notices something is wrong with her friends. She goes to see the nearest neighbor, Edna, but she has blown her head off. There is a journal that Edna was keeping where she had drawn pictures of the creature. That is what we call foreshadowing my friends. Turns out the critter is an alien, and it has come to Earth to use the ladies as incubators for it’s young. Now Charlotte must kill it and stop her infected friends from reaching civilization and passing along the spawn to others.

This is an interesting movie that shows what a talented filmmaker can do when they have a solid story and script. We have a small cast with just the three girls and a couple locals who roll in and out briefly. The story is contained in basically a couple locations with most of the action taking place at the house. This could have made for a slow paced and tedious flick, but the story has enough twists and turns to keep the audience interested. The three actresses also do a lot to help this along as even the “mean” girl seems real and you could see why they would hang out. The movie also does a clever thing with some dialogue that slips in the history of them being friends since they were little. That might not seem like much but between that and the performances I bought that they would hang out together.

I also was impressed with how the story was made to feel like it was much larger. This was obviously a smaller budgeted project but thru the creature communicating with Charlotte thru flashes of images as well as a fun ending it shows that this isn’t a one off incident but the beginning of a much larger invasion. I always say when reviewing independent productions that you should shoot what you have locations and budget for and that is what was done here with the bonus of creatively making it feel like a much more epic story. The filmmakers did a wonderful job.

I like the story and I like the cast. Now how do I feel about the special effects work? The look of the alien is cool. It isn’t the sort of thing that is going to leap up and menace anyone but instead manipulates people into rolling around in the goo and guts so it can infect them. So it mostly just lies on the floor or bed, but it is a practical creature that looks decent enough. The girls do get a bit sticky after going full on alien mom, but it is mostly puking up black blood and swollen bellies. But we do get a tentacle arm that was fun. There are just three kills, but they include a headshot and a smashed noggin’ which is bloody and fun. For the budget I found the fact that they leaned into practical effects work rather than relying on CGI a refreshing change. The meteors are CGI but that is done well enough, and it looks decent.

The Seed ended up being way better than I thought it would. This is why I keep sitting thru newer horror flicks. There are some gems out there that deserve to be given a shot and this is one of those movies. As of the writing of this review you can catch it streaming on Shudder. I recommend doing just that.