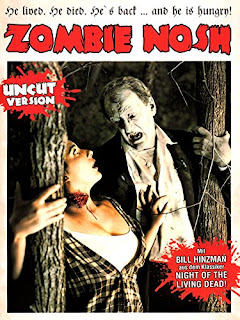 This is another Pittsburgh shot zombie movie. Though it has a solid Romero connection being that the director, star, and writer is Bill Hinzman. For those not in the know he played the cemetery zombie in Night of the Living Dead and while not implicitly stated his zombie character in Flesheater is suspiciously familiar. But even with that connection is this movie worth a watch?

Some “kids” go off into the woods for a Halloween party. They are getting there on a hay wagon pulled by a tractor so if you grew up like I did nothing quite says fall like scratchy hay and the smell of diesel fuel. While headed to their campsite the tractor passes a fella trying to pull a stump out of the ground. This is important because after some partying we go back to that guy and see him accidentally unearth a coffin and then break the seal. Inside is Hinzman’s flesh eating zombie who gets right down to business munching on his neck!

The rest of the movie consists of the zombies, anyone killed by the Flesheater rises as a zombie to spread the love, as they chow down on the locals. Some highlights are a family getting ready to go trick or treating and a barn party. There is also an abbreviated siege with the original group of kids holding up in a farmhouse. It all ends exactly how you would think. Which brings me to my final thought… God Damn it Vince you did it again! If you are a zombie movie fan you will get where I’m coming from.

This isn’t a great movie and most certainly not a classic of the living dead genre. What it is though is fun. The story, while predictable, moves along quickly getting from one attack and gag to the next without ever getting bogged down with silly stuff like character development or story. The Flesheater is on the loose and killing which is all that matters. Hinzman gets the fact that occasionally you can be entertaining without trying to make art. Before anyone tries to tell me that I’m not being fair or reading too much into it I had the chance to sit in a ballroom and listen to him interact with the crowd while the movie was playing. He knew exactly what he was making and had fun with it. That translates from the screen to the viewer which is why the movie works as well as it does. Since this is a zombie movie we need to talk about the creatures and the kills. First up these undead are your typical blue/grey faced ghouls without much in the way of makeup tricks. Other than zombie Harv they are basic. That is okay though because they make up for it with over twenty kills in the movie. Some are offscreen and again basic, but we do get some highlights. There is a pitchfork to the gut, some throats get torn out, a leg gets hooked, a nose is bitten off, and many zombies are shot in the noggin’. Though my favorite kill of the movie is a hand thru the chest. This is a sticky and gooey watch and I have always and continue to have a blast with it.

Again, not everything has to be art or try and make important points about society. You can also just make a dumb horror flick with zombies doing zombie things in an attempt to entertain an audience. That is Flesheater in a nutshell. It is a fun way to kill an hour and a half, which is all you need to do sometimes. So, kick back, turn your brain off, and enjoy the show.

Posted by Gutmunchers Lives at 3:15 PM