I’ve been having some amazing luck finding old made for television flicks to cover here at the site. This one stars Alan Alda of Mash fame as a local lawman named Dan. He wakes up at his girlfriends one morning to find out that one of the locals has died of a heart attack in the middle of the night. But he is bothered by the fact that she wasn’t wearing a nightgown. When her husband follows soon after he is suspicious, especially since he is missing his PJ’s as well.

More bodies follow with the only connection being that they all graduated from high school in the same year. Dan struggles to figure out not only the why, but also the how of the murders. With the help of the local doctor and her father the coroner he does eventually sort it all out. But will that happen before the killer is done? And will Dan take the big promotion and move to a bigger town?

Isn’t it Shocking? is interesting in that the story, while fairly direct, does keep you guessing as to the motive until the end. Honestly even then I wasn’t totally sure why the killer did what he did. Maybe he was just angry, but it is also possible that in his old age he was losing his mind and made a proverbial mountain out of a molehill. Since it isn’t a surprise who the killer is I might as well give you a bit more detail on what I’m talking about. The murder is Oates, who I think was kicked out of school after a prank went wrong. 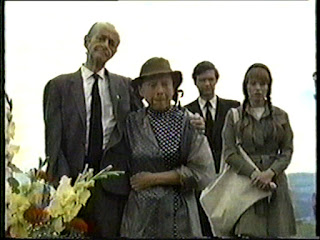 Again, we know who the murderer is all along so the story hangs it’s hat on watching Dan try and solve the mystery. This means that the drama and entertainment has to come from the actors. If we don’t have the cast selling us the story and keeping your eyes glued to the screen, then this won’t work. Here is where the movie excels. Alan Alda is surprisingly good as the lawman trying to figure things out. He makes you feel Dan’s pain as friends and neighbors die on his watch. He is supported by the likes of Louise Lasser (Crimewave, Blood Rage), Will Greer (The Waltons), Ruth Gordon (Rosemary’s Baby, My Bodyguard), and Edmond O’Brien (The Wild Bunch). So, there is a lot of talent in front of the camera. Their performances are the reason to stick around and see how things work out.

I was also surprised when I realized that Isn’t It Shocking? was directed by John Badham. Not only did he do a bunch of killer television shows but also brought movies like Blue Thunder, War Games, Stakeout, and Bird on a Wire to the screen. Hell, he also directed Saturday Night Fever, which isn’t a favorite of mine but is undeniably part of seventies pop culture. These old network television flicks used to be able to collect a lot of talent which is why so many of them are worth checking out. Which is why I’m going to recommend everyone do here. You can find it on YouTube as well as other spots online. Give it a chance I think you will dig it.

Posted by Gutmunchers Lives at 9:19 PM